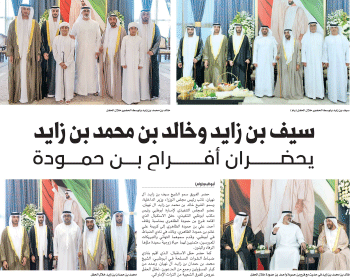 Their Highnesses offered their congratulations and blessings to the newlyweds, wishing them a happy married life filled with prosperity and children.

The reception, which was held at the Armed Forces Officers Club in Abu Dhabi, was also attended by Sheikh Mohammed bin Hamdan bin Zayed Al Nahyan, a number of senior officials and a group of invitees. The ceremony included performances by folk bands from the Emirati heritage.