Our Chairman, His Excellency Faraj Bin Hamoodah Al Dhaheri received the Abu Dhabi Medal in appreciation for his contributions to the UAE. 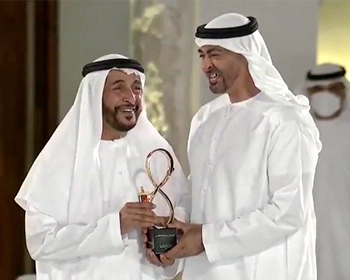 He was honoured in appreciation for his contributions to the UAE, and the philanthropic and humanitarian work.

Generosity is to give selflessly, to provide solely for the happiness of others, without seeking anything in return. He is a person whose values are demonstrated through his love for the UAE and his commitment to helping those in need.

The classrooms he supported attest to him being a kind philanthropist, and a believer that giving to this land is loyalty to it.

Remarks from the notable personalities:

"Throughout that development, several notable men accompanied and were inspired by our father the late Sheik Zayed, amongst them is Faraj Bin Hamoodah." –
H.E Abdulla Bin Aqeeda Al Muhairi
Secretary General of Zakat Fund

"He is amongst the pioneers, he had no prior experience in neither business or government work, yet he managed to contribute in both fields. Secondly, Faraj partook in philanthropic and humanitarian work and his effort is notable." –
H.E. Mohamed Al Fahim
Al Fahim Supervisory Board Member and Chairman of Family Council

"This person loves his country and his community. His investment in education is clear evidence of his dedication to his country." –
Mohamed Al Mazrouei
Director of Administration Zayed University

"He wanted to share the knowledge and experience he has with everyone, as he was amongst the first batches of students who were educated abroad." –
H.E. Ahmed Bin Shabib
Friend

"He would always advise us to take care of students as he believed that someday they will take on imperative roles and serve the country." –
Dr. Al Taher Al Kindi
Second Vice Chairman Abu Dhabi Chambers